“What are some rules of making successful follow up calls to prospects?” (Answered on Quora…)

“What are some rules of making successful follow up calls to prospects?” (Answered on Quora…)

What are some rules of making successful follow up calls to prospects?

Continuation vs. Advance. This is described in the book “SPIN Selling.” An advance progresses the sale whereas a continuation simply maintains the sale in its current state.

For example… In an advance, you talked with a prospect last week and you both agreed that the prospect would talk with her to team set up a product demo for everyone on her team. In your follow up call, you and prospect nail down a time (“next Tues at 10am”) and process for delivering the demo (“via WebEx”.). In this same scenario, a continuation would be a call to that same prospect and she tells you that she’s been really busy since your last call and hasn’t had a chance to talk to the team, but asks you to try her again next week. Alternately, a voicemail to your prospect would also be a continuation. The sales conversation is still open, but you’re still in the same spot as you were following your initial call a week ago.

Prepare a script. For even the simplest of calls, be prepared with exactly what you want to communicate. 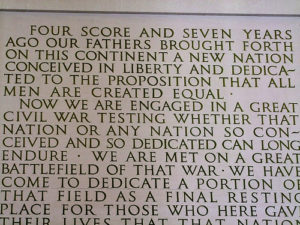 What if Abraham Lincoln decided to “just wing it”?

Remember, in every conversation there is:
1. What you wanted to say;
2. What you think you said;
3. What you said;
4. What the prospect heard.

Read the rest of the answer here on Quora…

Follow me on Quora! I’m on Quora every week answering questions about selling, the sales process and developing sales models.