Startup Selling Lessons Learned: Confirm the “Why” of a sales presentation

Startup Selling Lessons Learned: Confirm the “Why” of a sales presentation

The Situation:
Big meeting with a C-level executive at the top, top, top of the org chart. We’d been working with several operations managers to implement our software over the past nine months, and this meeting was set up to discuss how we might expand our work other business units.

Lesson Learned:
Confirm the meeting intentions and agenda. Always. No matter what the situation, no matter who the executive, no matter how much you think you know about the meeting from the most credible people around you.

For the weeks leading up to the meeting, we relied on our own experience on how meetings like this should go and spent all of those hours interviewing operations executives. Yet we never took the time to simply connect with the executive or his assistant to confirm the meeting agenda and expected outcomes. Major fail…

What did we do right?

2. We were super prepared for the presentation, enabling us to quickly dive sideways in the presentation when the executive took us off of planned track. We had planned ahead to discuss all of software applications that were used by the company, not just the application that was the intended focus of the meeting. This proved to pay huge dividends for us.

Here’s how it went down…

When the executive we were meeting arrived to the conference room and sat down, and we began our introductions, he stopped us, looked around, looked at his phone and asked in the most honest way – “Who are you, and why are we here?” It wasn’t asked in a challenging way as happens with some executives that want you to get right to the point. He honestly did not know why he was in this meeting other than the fact that his assistant told him he was supposed to be here right now.

Even though, as we understood it, he was the person that had asked for the meeting several weeks ago. In fact, we were scheduled to meet the week prior and he pushed it back a week.

We had spent most of the past week developing our presentation – thinking through the economy of slides – what to show that matters most to him, interviewing professionals across the company about they thought he would want to see and what he cared most about. Our design teams worked extra hours to provide us with beautiful screen shot mock-ups to impress him. My colleague leading the project spent Super Bowl Sunday in the office by himself on final presentation preparations.

And now, all of that now completely obliterated. 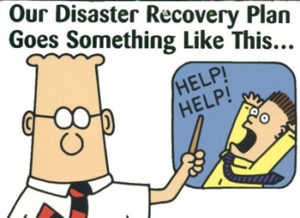 First, I laughed a little (to myself).

Then I started over, as if he had been teleported to this room from another planet, and I had to explain my reason for existence – who our company was and why our our understanding for the purpose of the meeting. Together, we discussed our “Situation Slide” (which I highly recommend preparing – thank you to Peter Cohan at SecondDerivative for this powerful tip…)

When I did that, the executive seemed uncomfortable with what I was saying, so I asked – “Could I ask what’s frustrating you?”

He explained that he didn’t necessarily agree with a few of the assumptions I was making about the company’s intentions and objectives.

So I asked him to explain which parts exactly. Voila! Conversation started. Even though the conversation and presentation immediately drove off the rails from what we intended, the “Situation Slide” created the opportunity for conversation and discussion.

From there he shared his views about the particular situation we planned to address, and most importantly, he told us what he most cared about, and it turns out his major focus was not for the business area that we had prepared to discuss.

Eventually, we got into the presentation – skipping around from our plan, showing what was most relevant from his perspective, and even moving off-script to walk through a completely different software application than what we prepared to show. The meeting was scheduled to run an hour, and we went 20 minutes past that. We ended the conversation with the executive suggesting that we should be in consideration for a significant open RFP for one of the business divisions.

You might ask – “Hmmm…. Good save, but why didn’t you confirm the agenda and outcome with this executive ahead of the meeting? Why didn’t you do a pre-call?”

Valid questions. My reasons, though not good ones, and why this is a lesson…:

Firstly, the meeting was originally set up for us through another C-executive at the client, and we were told directly by the first executive how important this meeting was for this executive.

Secondly, this executive is at the top of the org chart – you literally can’t go any higher than this person. I allowed us to feel intimidated by this, and instead discussed the presentation all around the executive assuming this would prepare us accordingly.