Sales Tip of the Day: Where you sit matters

Sales Tip of the Day: Where you sit matters

Where you sit during your “Big Sales Presentation” matters. Too many times in a group setting, I’ve watched my colleagues stake out ground on one side of the conference room, leaving open only the chairs on the other side of the table. It’s like they’re hoping either an arm wrestling tournament will ensue. 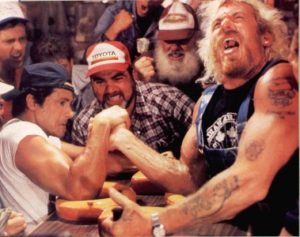 Not what you want in a sales presentation…

This is crazy! The end goal of the meeting is to generate a collaborative working relationship between you and the prospect! 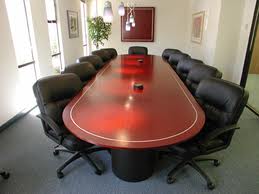 (Robert Cialdini discusses the “Liking Principle” in Chapter 5 of his book “Influence” where he details the “Robbers’ Cave Experiment.“

This is a strategy I learned many years ago from Brian Tracy in “The Psychology of Selling.” When you’re calling on a prospect in person, the normal office arrangement has the prospect sitting behind their desk with a chair or two for visitors. The desk provides a psychological barrier for the prospect. Tracy suggests that at the start of the sales call, simply ask – “Do you mind if I swing my chair around over there?” Almost every prospect says “Um, sure…” not realizing that they’ve immediately torn down proverbial wall between themselves and the prospect. 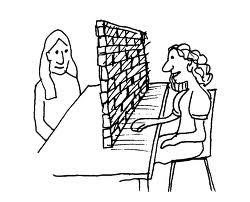 Bring your sledgehammer with you to your sales calls!

I used this strategy when I sold textbooks to college professors many moons ago. We were trained to visit professors during their office hours, find the sample book that was sent ahead of time, pull it down from the shelf, then open it and begin asking the professor which parts of the course were most interesting or most difficult for students. Then we’d flip to that part of the subject textbook to assess coverage of that topic.

I always pulled the book from the shelf then walked around their desk to stand next to them while we reviewed the text together. This put us on the same “side.”

If the office is small and inhibitive for this, then plan ahead by talking to your prospect’s assistant to arrange a separate meeting room. This provides additional advantages: