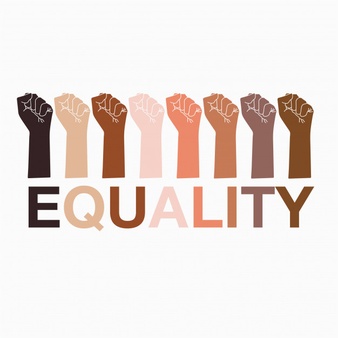 I’m no more qualified to write and share this post than you or most people – I’m a 1%-er that’s running his business and managing through COVID lockdowns. Usually, my biggest worry in the day comes when I have to share bandwidth with my wife and son or help a client navigate through a rough patch in their business.

Sure, I have all pressures of any entrepreneur – pushing the next marketing campaign out the door, booking sales calls with prospects, working with clients, and growing our business.

But the reality is that I’m sitting atop a social pyramid designed to make my life easy. That’s a realization that’s become apparent and obvious to me over the past year, and again these past two weeks, and that’s why I’m sharing this post with you today.

My hope is that if you are already taking steps to dismantle the social construct of structural racism, white supremacy, and anti-Blackness, that you’ll keep going. And if you’ve not taken any steps so far, my hope is that today will be the day you start.

At 1pm today, I’m hosting a room on Clubhouse – “Tech Founders Tackling Structural Racism” – a conversation about what and how startup founders can help to break the construct of structural racism. It’s okay if these topics make you feel uncomfortable. All the more reason to join.

Find me on Clubhouse: @scottsambucci

Back in June, I recorded a podcast episode in which I talked about my experience growing up with white privilege and my ignorance about structural racism. (Ep. 92: The Uncomfortable Conversation: Sharing My Personal Journey of Awareness, Analysis, Accountability, and Action to Fight Structural Racism, White Supremacy & Anti-Blackness)

How different would that situation have been if I was an Afro-American? Would I have ended up handcuffed, in jail, or worse? I’ll never know. I’ve wondered if the truth lies in a parallel universe somewhere.

These past two weeks, I’ve seen that parallel universe. When I view the images and videos and see the treatment of the rioters that stormed the Capitol that day, the structural racism is clear.

Putting aside whether or not the Capitol rioters were simply protesting the election results or an overt action of white supremacy, let’s just ask this question –

If a group of Black Americans protested, in the same way, four years ago on January 6, 2017 – the date on which Congress certified the previous Electoral College vote – what actions would have been taken against them?

We already know – all we need to do is look at how the #BlackLivesMatters protestors were treated this past year in protests across the US from the peaceful marches in St. Louis to the Washington D.C. protestors forced to scatter for a photo shoot.

This Time is Different?

A good friend of mine is an attorney at the ACLU. When the #BlackLivesMatter protests began back in the Spring, we talked about the movement. We both said – “This time feels different.”

But is it?  Are we back to where we were? Worse, are we regressing?

People in the white community said they were outraged by the incidents of police brutality. People protested and marched, and said that enough was enough.

But people also get outraged when their takeout order gets screwed up or the Internet goes down. Soon, they forget about the injustice and go back to life. It’s like a New Year’s Resolutions – lots of “I should…” and “we should…” and even some action taken for a white, like protests or donations, then it’s back to the way things were.

These past two weeks, I reverted back to a habit of refreshing news websites throughout my work day. I hadn’t done that since the election. As I flipped to the news and then back to work, I noticed a stark difference between what was happening in the world and what appeared in my LinkedIn feed.

When the first wave of COVID lockdowns hit back in March, that topic dominated my feed. When the #BlackLivesMatter protests began in the Spring, there was a flurry of posts and support for the movement. This time, I only saw a few references and posts about the riots, especially as it related to the Black Community.

After some searching, I did find the posts I was hoping to see.

Read this post from Madison Butler: Remember when kneeling was “unpatriotic”? And these posts from Elizabeth Leiba: This IS America! ???????? Don’t fight me and I stayed in bed all day yesterday with a MASSIVE headache. And this one from Natasha Bowman: While peacefully and legally protesting (standing on a sidewalk with a sign) the violent murder of George Floyd this summer, my daughter and I were chased by at least 10 NYPD officers.

I was one of the many who were silent. I wasn’t sure what to say or how to say it. Not anymore.

This is about equality. If you think we’re all playing under the same rules, we’re not.

I just wanted to listen to the conversation – What was the Black view on what happened? How are they feeling about the treatment of the rioters compared to the #BlackLivesMatter protesters?

If you haven’t listened to this conversation, you need to. Not just conversations happening on Clubhouse, but the broader conversation. If after listening to the conversation, you’re not spurred to action, to follow through on what you might have promised yourself back in the Spring, or not motivated to continue what you started, then I don’t know what will.

Here’s the biggest problem I had at the time – while others were on Clubhouse rooms talking about digital marketing, how to build million-dollar companies, and what it’s like being a successful entrepreneur – mostly filled with white people – I was one of two white people in a room of 100+ Blacks discussing these social issues. This was the same situation that I saw on LinkedIn. The Black Community expresses anxiety, fear, frustration, and anger while the White community was carrying on with their daily routine.

I’m sharing this because this is indicative of the greater problem – dismantling structural racism is a cause of convenience for most whites, myself included.

While our company and family took specific actions during and since the #BlackLivesMatter protest, I will and am doing more.

We all need to take a moment to ask – Am I really doing my part? It’s not enough to say we’re trying to recruit for diversity and inclusion. Posting a job and tagging the post with EOE isn’t enough. There needs to be specific, regular action. Equal opportunity doesn’t mean equal effort. It means more effort.

It’s not about “doing enough” – there’s no magical quota to fill. It’s about making racial equality an everyday activity because it’s the right thing to do.

I’m no more qualified to speak or write or act on this than you, but if we don’t acknowledge, accept and act, waiting for someone else to do something, or waiting until we have more time, nothing will change. We’ve tried that for too long.

You can say you’re a struggling entrepreneur just trying to raise capital or launch your product or close a few deals. We all have the strain of work-from-home and kid’s distance learning. But remember that you’re struggling at the bottom of the top of the pyramid. It’s about your relative situation. Take a stand with your company.

Any new habit, any new action starts with a decision to commit to the process. Make the time. Take actions every day. Track your progress. Share your wins and learnings. Pay attention to what it takes. Consistent actions create momentum. It creates a wake that pulls others along with you on the journey. People will want to help you. They’ll want to be part of something remarkable. It inspires and motivates to help you. It will show others that they too can take action.

Now means today. If you have an open job, search LinkedIn Groups for “Blacks” and “Blacks Business” and outreach to those groups. Post your jobs on places like BlackTechJobs. Pay for diversity training. Examine your vendors to see if you’re spending your money with Black and minority-owned businesses.

Join the conversations happening on Clubhouse or other forums to gain perspective. Get comfortable saying phrases like structural racism, anti-Blackness, and white supremacy – they are simply descriptors of our societal situation. I was very uncomfortable with these terms, and they still make me squirm a little when I say or write them. That’s okay – because the more that we acknowledge and accept that this is our situation right, the easier it will be to act towards change.

Back in the Spring, my son was active in the #BlackLivesProtests movement – making posters and asking questions about what was happening. When I explained that people are protesting because Blacks are not given equal treatment as whites, he said – “I thought Martin Luther King, Jr. changed all that.”

How could I respond other than – “You would have thought so by now.”

That’s the challenge that all of us have – the laws are there for equality – equal treatment, equal opportunity, equal standing.  We can enact affirmative action, anti-discrimination policies, fair housing, and civil rights policies. But the laws, as we’ve seen this past week, are not enough if civil society – the citizens in a society – do not enforce those laws through their attitudes, actions, and behaviors.

If you want a place to get started or take the next step, I’m hosting a room on Clubhouse today at 1pm – “Tech Founders Tackling Structural Racism” –a conversation about what and how startup founders can help to break the construct of structural racism. It’s okay if these topics make you feel uncomfortable. All the more reason to join. I don’t have the answers – but I know that if we start the conversation – together we can start to find them. None of us is smarter than all of us.

Find me on Clubhouse: @scottsambucci

​Become an Insider! Gain access to videos, articles and more.

​By submitting this form you are agreeing to receive email from us.