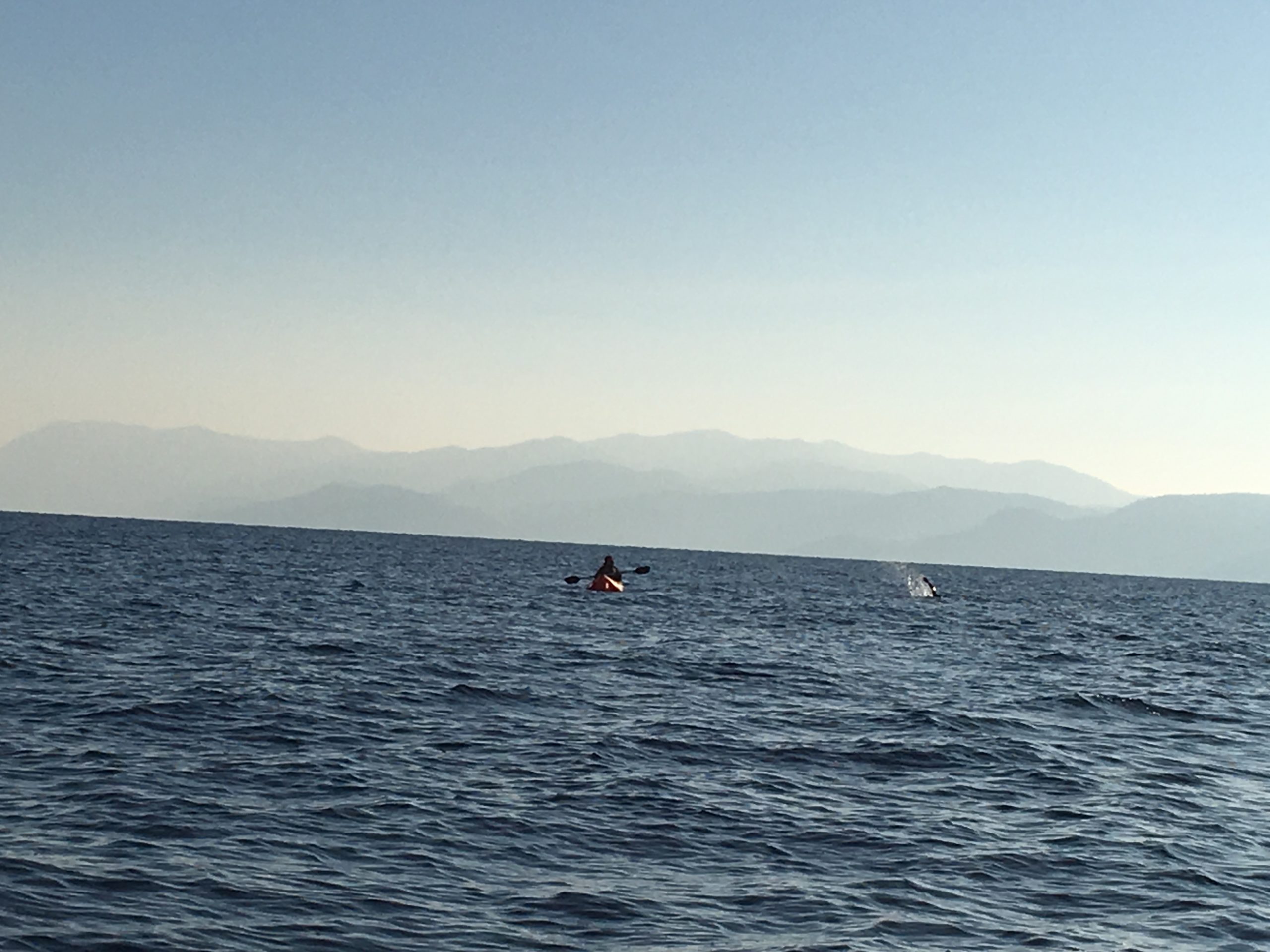 I swam 10.5 miles across Lake Tahoe Sunday morning, from Cave Rock to Emerald Bay. It’s a course that Tom, the boat captain, has swam and led many swimmers.

My longest open water swim prior was 2.5 miles from Aquatic Park in San Francisco Bay to Alcatraz and back.

Sunday’s swim was a training swim for me, as I gear up for a 21 mile swim across the Catalina Channel in October that’s part of a multi-day endurance event called Uberman. I needed to see where I was with my fitness, ability to adapt to colder water and execution of a nutrition plan over a long distance swim.

Looking back at the experience, I began thinking about the parallels of my effort to selling as a startup. Enterprise sales are challenging enough, and become even more so when selling a new product as a new company in any market.

Here are a few lessons from the swim applied to Startup Selling:

That’s 2:00 AM. This was to avoid the wind, the current and the boat traffic that kicks in later in the day.

When I began the swim at 3:13, I barely made out my own arms in the water. I could only really see the glow sticks adorning the kayak and my kayaker’s red headlamp. We all knew the final destination, but none of us could see it from the start.

You don’t have to see anything to know where you’re going. Just get in the water and start swimming.

When you’re starting a 10.5 mile swim, it’s easy to think about the totality of the effort. Questions arise in your mind – How long will it take? What if the wind picks up? What if I can’t make it? What if I get lost? What if my body gives out?

I’ve heard anxiety described as “worrying about the future,” and there’s certainly a lot of that out there in the water. 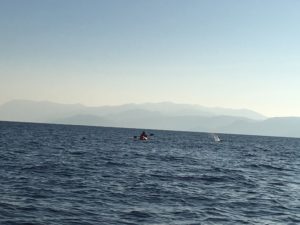 I imagined our route from Cave Rock to Emerald Bay in my mind, then realized all that mattered was the next stroke.

3 – You’ll be shocked by who’s willing to help you.

I needed some help finding a kayaker, and Tom found Kathy for me. She did the same swim a week ago with Tom as her boat captain. She and I met for the first time in the marina parking lot that morning.

“Hi Kathy. Thank you so much for helping out. Tom said you did this swim last week. That’s awesome.”

“Are you from around here [South Lake Tahoe]?”

“I live down in the Bay Area.”

“Have you just been up here all week hanging out since your swim?”

“Did you drive up from Danville here just to kayak for me?”

“Are you serious? Really?”

“Tom asked me to. That’s how we South-siders like to be.”

Turns out Kathy drove up on Saturday night and slept in her truck in the marina parking lot, all for the unpaid job* of sitting in a kayak throughout the night for a complete stranger to accomplish his goal, just because Tom asked her to help out.

It’s empowering to know that people will help you if you just ask them.

4 – You need a team, and unequivocal support from your loved ones.

The more I prepared for this swim, the more I learned how much it required a complete team – a boat captain, a second captain, a kayaker, a feeder, and a babysitter.

The boat captain sets the course, gives directions and watches for hazards. The second captain helps because each of these tasks individually require full concentration. The kayaker is the beacon. The feeder keeps you fueled. The babysitter stays in the hotel with your son when you leave at 1:45am to get to the marina.

Most of all, none of this was possible without my wife. Not only did she morally support the whole expedition, she volunteered to be my feeder. In fact, she couldn’t wait for the adventure.

Her job for 6+ hours? Fill water bottles with drink mix, shake them up, hand them to Kathy, then get them back, and repeat. Every 30 minutes. 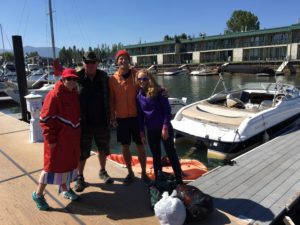 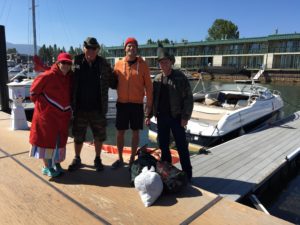 You can’t do this alone. Find your team.

5 – The best talent is the most the difficult to acquire.

It’s not that Tom is unresponsive. Tom is BUSY doing his thing. He’s helping multiple swimmers every week do these swims, because he’s that good.

Every call with Tom ended with him saying – “Yeah I think I can work you in some in the next couple of weeks. I’ll let you know.” Unsettling, yet I felt 100% comfortable working with Tom. There was something about his confidence and experience that I felt I could trust.

When I needed to move the date we set because of work obligations, the situation turned me into a standby. Tom and I spoke on the Friday afternoon before the swim, and that’s when I found out that we’d be doing the swim on Sunday – 36 hours later.

Yet I was willing to put myself in that situation to work with the best.

6 – Visibility can be disorienting.

As the false dawn arrived around 5:00am, every left-side breathing stroke brought two things into sight – a wave splashing over my head and the mountains on the coastline in the distance. 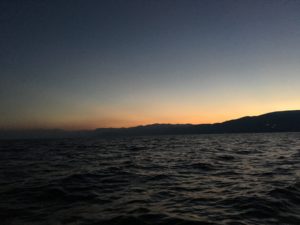 Swimming parallel to the water, I couldn’t make out the horizon, and felt the sensation of tilting upwards or downwards. It was a good 45 minutes of disorientation before the true dawn illuminated the front of the mountains in the distance, and broke the spell. Now that I could see, I preferred the darkness.

Sometimes you’re better off focusing on what’s right in front of you instead of seeing everything else around you.

7 – Know yourself and make adjustments.

I planned to swim with my shoulder-less wetsuit – enough to keep my torso warm while keeping my arms free to feel the water. (BTW – A wetsuit is blasphemous to many open water swimmers… I’m still learning how to adapt to cold water, and alas, I’m not there yet…)

As we reached the starting point at Cave Rock, Tom reported the water temperature at 65 degrees. Not warm, but not cold compared to the 50s I’ve experienced in San Francisco Bay and Lake Coeur D’Alene.

Then he said – “You really don’t need that wetsuit.”

For a moment, I considered giving it a go without a wetsuit, and decided to stick with shoulder-less wetsuit.

After my second “feed” – I stopped every 30 minutes to refuel – my teeth were chattering and I felt cold in my shoulders. Sixty-five degrees is warm for most open water swimmers. For me, it meant trouble.

Time to adjust. I jumped on board the boat and switched to my full wetsuit.

It doesn’t matter what others think or what they did. Know yourself, know your strategy, then adjust as needed.

I spoke with Brian MacKenzie a few weeks ago, creator of Cross-Fit Endurance and author of multiple books on endurance training. I asked him about dealing with long distances in these endurance events. He told me:

“When you look at the physiology of a lion chasing an antelope – just the pure physiology – they’re exactly the same. You what the difference is?

“The lion WANTS to be there.

When things get tough, you’re doubting yourself and you want to quit, remember:

9 – Objects in view may be farther than then appear.

After full daybreak, I saw the pine trees covering the opposite shore. I was getting close. I felt accomplished knowing the worst was behind me.

Me: “Tom! How are we doing on distance?

Huh? I was less than halfway across…

Then after a feed or two of good swimming, Emerald Bay came into view. It was right there. I could see the shark fin-shaped island as a sighting point. It was so close.

Still lots more work to do…

The finish line might be right there, and it’s still far away.

In the days and minutes leading up to the start, Tom kept telling me – “This is your swim. Do whatever you want – wetsuit, hang on the kayak, stop if you want. It’s your swim.”

Then we started, and Tom transmogrified into a bulldog.

I stopped to adjust my wetsuit and glow sticks that kept poking me my neck.

Kathy and I needed to figure out the right place for her to lead.

Tom: “What are you doing out there? Having a meeting? Let’s go!”

I’d been swimming for five hours, was hungry and tired, and took a longer break.

“Why are you stopping? The current is pushing you north. You gotta move.”

I finally yelled back – “Dude – give me a minute. I’m tired. Fuck man. You fucking do it.”

Back on the boat, Tom turned to Lena and said – “Tell him I have done it. Twice.”

Tom didn’t care about wetsuit or not, or which wetsuit. Or food. Or how I felt. Or anything else. His job was to get me from Point A to Point B.

You need someone that’s done it before and knows where you want to go so they can get your ass in gear.

11 – Save a little in the tank. You’ll need it for the big push. And trust me, the big push is coming.

As we reached the opening to Emerald Bay (for real…), the current picked up, moving directly from left to right.

“The current’s moving straight north. You need to push through this or we’ll miss the opening.”

Five hours and nearly nine miles of swimming and now I had to push, or the whole venture would fail. So I pushed and we made it.

You can do all the work, only to get pushed aside at the end. Expect the big push, and be ready for it.

Once we were comfortably in Emerald Bay, we still had 1.5 miles to shore – that’s a solid 45-60 minutes. I eased into a stroke cadence, yet it seemed I wasn’t getting closer to shore.

Tom, turning to my wife: “He just swam 10 miles and he’s pissed about an extra half mile. The shore is right there and he’s done…”

You’re tired and fatigued. You’re hungry. You want it to be over, and it almost is.

But not until you finish.

As we neared the finishing spot, Kathy said – “Most people are still sleeping off their hangovers.” 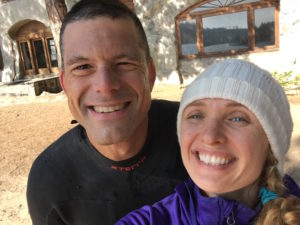 Damn right. I started in the dark and now I’m here. At the finish. Right now. With the sun illuminating the lake bottom and sand between my toes.

Bathe in the present.

It wasn’t about “officially” crossing Tahoe with or without a wetsuit, or how long it took.

It was about the experience of swimming 10.5 miles across Lake Tahoe and what I could learn from it.

At times, I needed a break because of fatigue or cold or frustration. Sometimes feeds were hard to keep down. Sometimes I gagged on the water.

I finished. My swim, my way.

Thanks for reading this far…

* While Kathy accepted the job without any expectations of payment, I did compensate her for her time and effort.